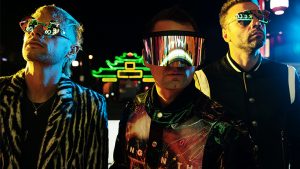 Releasing their debut album in 1999, the band stood apart from other rock outfits thanks to Bellamy’s falsetto voice and their alternative take on the genre.

The band’s sophomore album Origin of Symmetry was further proof of that as they fused rock with romantic classical elements that lent itself to live performance. This blend of genres continued to be heard on the band’s third studio release Absolution which went on to be their first of six consecutive UK No.1 albums.

Experimenting with electronica and pop influences, Muse released Black Holes and Revelations in 2006 which included the hit single ‘Supermassive Black Hole’ that helped the band reach a wider, international audience.